The market of typical text messaging has been dethroned by a number of new, funky and easy to use messaging apps. In fact, online app messaging comes with a lot of benefits over the former. These online apps are easy to use and are extremely cheap if compared with the old age sms-ing. With the advent of internet and smart phones one can now easily stay connected with one’s family and friends through these simple yet competent chatting apps.

Asia has emerged as a leading and base market for many of these messaging apps, Line, Kakao talk, WeChat and Viber being one of the hot favorites. From teenagers to aging adults, everyone is putting up 24 hours on chatting and making up new friends, online. Kakao Talk, Line, WeChat and Viber can be effortlessly downloaded in both Android and iOS operating systems. Excessive use of Internet and messaging apps have stirred the spreadsheets of the telecom industries, who seem to be under a lot of excruciating pressure of execution and performance, right now.

Line: In 2011, at Japanese arm of Naver cooperation, a few Japanese engineers gave birth to this dynamic and easy to use messaging app. The specialty of this application is that it can be used in both, smartphones as well as in personal computers. It has a huge user base in and around Asia and it would be an understatement to say that Line is grabbing its users at a blinding speed. The app touched 100 million users just within a time span of eighteen months, enough to prove that gradually but firmly its making a stronger hold even in the European markets.

Kakao Talk: Kakao talk was established by Kakao Corporation whose office is based in Seoul, Korea. The app has many awards in its stride, it was chosen by Cnet as the No. 1 free Sms app. Kakao talk can be downloaded for free in various operating systems like Android, Blackberry, windows phone and IOS. Kakao is a lot better than most of its contemporary apps.

WeChat: With respect to the rising messaging app market in Asia, the sophistication of Japan and alacrity of Korea was then subjugated by China. China is emerging as one of the growing hub of power and technology. WeChat is one such addition to their success coffers. Released in 2011, the app can be used in most of the worldly vernaculars, Hindi, Indonesian, Russian, Spanish, Korean, Japanese, Portuguese, Turkish, Malay, Polish, Italian and Thai. This can be used for simple “one on one” chatting, hold to talk, photo and video sharing and more such fun features.

Viber: Developed by the Viber media, it was initially introduced only in the iPhone to give Skype a run for its money but later on in 2012 it was made open to all the other restricted audiences. It provides all the same features like video media exchange, audio and image sharing etc. It is equipped with high definition voice engine that can be used in android, iPhone, Samsung’s bada platform, Symbian and Nokia. Like Line even this can be installed in and used through your personal computers. 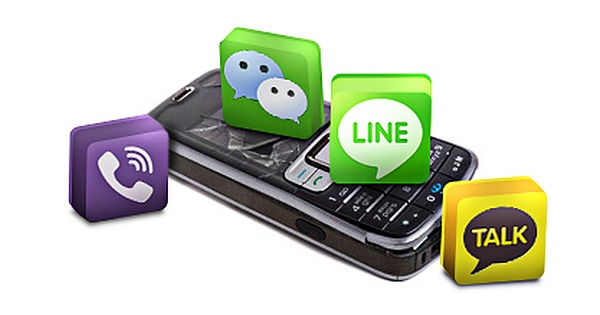