The telephone is old school technology now; video chat is the way to go for communication these days. iPhone users boast about their Facetime, but there are plenty of Android apps that offer the same, or better, functionality. You’ll probably want them all on your phone, as each has a slightly different user base.

Skype—Skype was the pioneer of video calls, and its reward is the biggest piece of the user pie. This app is one you want to have installed on your Android simply because it offers communication lines to the largest pool of potential contacts– 299 million users. Since Skype is cross-platform, those users may be sitting at their desktop computers, talking on their iPhones, or using Android apps like yours. The program might not be as cool as some newer video chat apps—but, hey, it works as advertised.

ooVoo – The coolness and functionality of ooVoo means it ties for first place with slow and steady Skype—if you can only have one video chat app on your smartphone, that one may well be ooVoo. ooVoo is all about video calls, and it has a slick, easy to use interface that is a pleasure to use. You can do group video chats with up to twelve people, and the video and sound are both premium quality. What’s more, you can login with your Facebook id, and your Facebook contacts will be automatically linked.

Fring – Fring deserves some first-comer points as well, for it was the first to offer functional video chat to Android users. It may be more clunky than other video chat apps, but it continues to provide top-notch video calling for groups of up to four people. It also includes the regular chat and messaging capabilities we’ve grown to rely on. You can login with your phone number rather than going through the nuisance of making a new username and password.

Tango—if four, five or even twelve simultaneous video calls don’t cut it for you, you can try tango, which offers video calls with three hundred people at once. It’s easy to use, with an intuitive interface, and they also have user-friendly phone number logins. They have fun social features, too, like sharing songs and in-app games.

Google Hangouts—Here’s another app whose strength lies in its immense user base. 2014 means that there’s hardly anyone without a Google account, and you should always be able to find a friend to hangout with. Most of the early bugs in this program are being ironed out, and it is becoming a good option for video calls. You can have group video chats with up to ten friends, or live stream to the world if you have something you want to get out to a really big audience.

This is just the tip of the iceberg of what’s out there, but installing these five apps on your phone will put you well on the way to unlimited, free communication with everyone you care about. 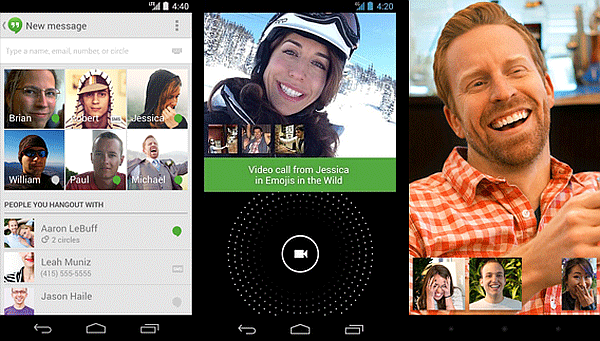