Yahoo isn’t often spoken about except when in reference to email accounts. However, that may be changing within the next few months with the introduction of Yahoo’s new apps. Yahoo engineers have been working on two new messaging apps, one of which is focused on direct chat, and the other which is focused on group chat. The inspiration behind these two apps are the “social” and “search” advertising areas that companies thrive off of. When the apps launch, they’ll be available for most major operating systems, including Android.

Although, we’re unsure of the official names for these apps, we do know a bit about them.

The direct messaging app will feature video chat options like Skype, along with pre-recorder video and audio messages like Snapchat. The app will also contain text messaging capabilities. This app will be marketed to teenagers who have made apps like Snapchat popular, as Yahoo wants this new app to be just as successful. Also, marketing the app towards the younger generation will bring young people over to Yahoo, as opposed to the older generation who regularly uses Yahoo in the form of email and aren’t as likely to use social media apps.

The group chat messaging app features a pseudo-social network inside of the app. This allows users to be connected in a private space, but still be able to hold professional chat meetings and conferences.

Yahoo will also encourage businesses to use the group chat app, via a business functionality within the app which will allow business members to have secure chats in a group setting.

Both apps will have a user-friendly interface and customizable themes to suit each user’s individual taste. The goal of the apps is to bring users into the Yahoo side of the social media world. By gaining the younger generation’s app use, Yahoo hopes to gain advertising. This advertising will be by word of mouth and reviews, primarily.

Depending on how well the apps do, Yahoo may or may not expand them onto other operating systems and make them available for other platforms such as laptops, tablets, and desktop computers. This expansion would make the apps extremely versatile and even easier to use as users could use them on virtually any platform and from any device.

So, what do you think about Yahoo’s new app ideas? Are they worth the money (and hype?) Will you download them when they launch? 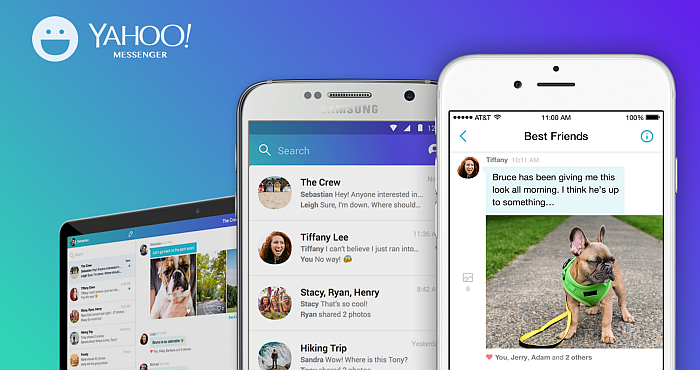