Telegram Messenger, which has been termed as the security-focused instant messaging app, has made the announcements of some new enormous functionalities to its main application. The company has added a functionality that enables users to chat-with-1000-people-at-once functionality. These groups will be muted by default when you join them, on your app, such that the other 999 people don’t over-accumulate our smartphone with dozens of messages and notifications.

In design, all the Telegram Messenger groups are democratic. Any of the member can change the group’s photo and name as well as invite new members. It’s very ideal for a small band of coworkers or friends. Although, the app can still support communities that are much larger and which require more administration. For them to make the work easier, they will introduce admins for the larger groups. This is as per a post that was made on the official Telegram’ blog.

Whereas by default all the members of the telegram groups are in control of their respective groups, they can still choose on how these groups will be operated. In any case, if they want some more order, they can appoint additional admins o their respective groups. These administrators will have the mandate to remove and add members of the groups. This is the only way that a person will be able to join the groups that have switched to admin’s control. The admins will also be able to change the photo and name of the group in the way that suits the group that they are administering.

Furthermore, Telegram Messenger is also increasing the maximum number of members who can be part of a given group on their service. According to the blog post on the company’s official blog, the company has always been several miles away from their competitors when it comes to the maximum number of group members per group. For example, before the current initiative you could have groups of a maximum of 200 members who could communicate efficiently using hashtags, mentions, and replies. But the company has gone further by increasing the membership to 1,000 people per group.

Users can now upgrade their groups, when they are full with 200 members, to supergroups of a maximum of 1,000 members per group. Users will have to update their apps for this functionality to work in their apps. 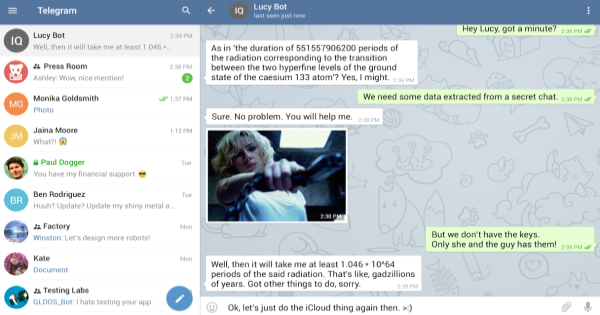